Thousands of local people turned out in 1921 when Westbury unveiled two war memorials to pay tribute to the men who had given their lives in what was then known as the Great War. 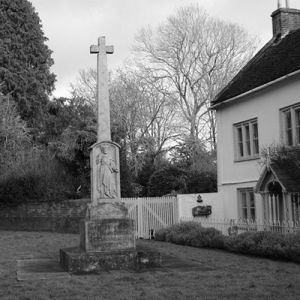 The town’s first memorial was erected in June 1921 in the churchyard of All Saints Church and it still stands there today.  The inscription on the monument records the Great War as 1914-19 reflecting the fact that the actual date of the formal ending of the war was 28 June 1919 with the signing of the Treaty of Versailles.

The following month – on Sunday 17 July – the war memorial in the Market Place was unveiled. The new memorial, which listed names of those killed in the war was a handsome obelisk made of Bath stone and surrounded by cast iron railings.  This memorial continued to be used as the town’s gathering place for remembrance parades and services. 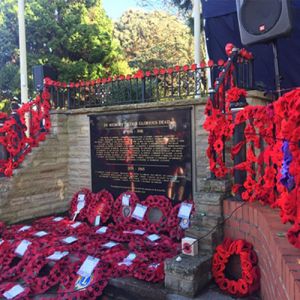 By the 1970s, discussions were taking place about removing this memorial to make way for more car parking spaces and a new war memorial was commissioned and dedicated on 11 November 1974 in the grounds of Westbury House (the local library).  The old memorial was removed the following year.

The new memorial was later moved to its current place in Edward Street where it has been the regular venue for increasingly large crowds marking the annual Remembrance Day parade.

For more information on this and other aspects of historic Westbury, please go to www.westburyheritagesociety.org.uk/history-of-westbury/war-memorials

This website uses cookies to improve your experience while you navigate through the website. Out of these, the cookies that are categorized as necessary are stored on your browser as they are essential for the working of basic functionalities of the website. We also use third-party cookies that help us analyze and understand how you use this website. These cookies will be stored in your browser only with your consent. You also have the option to opt-out of these cookies. But opting out of some of these cookies may affect your browsing experience.
Necessary Always Enabled
Necessary cookies are absolutely essential for the website to function properly. This category only includes cookies that ensures basic functionalities and security features of the website. These cookies do not store any personal information.
Functional
Functional cookies help to perform certain functionalities like sharing the content of the website on social media platforms, collect feedbacks, and other third-party features.
Performance
Performance cookies are used to understand and analyze the key performance indexes of the website which helps in delivering a better user experience for the visitors.
Analytics
Analytical cookies are used to understand how visitors interact with the website. These cookies help provide information on metrics the number of visitors, bounce rate, traffic source, etc.
Advertisement
Advertisement cookies are used to provide visitors with relevant ads and marketing campaigns. These cookies track visitors across websites and collect information to provide customized ads.
Others
Other uncategorized cookies are those that are being analyzed and have not been classified into a category as yet.
SAVE & ACCEPT
Christmas in Westbury Celebrations - Saturday 3rd December 2022 - 1pm - 7pm - Live music, market, food, entertainment, Santa's Grotto and the light switch-on - find out more here!
Go to Top