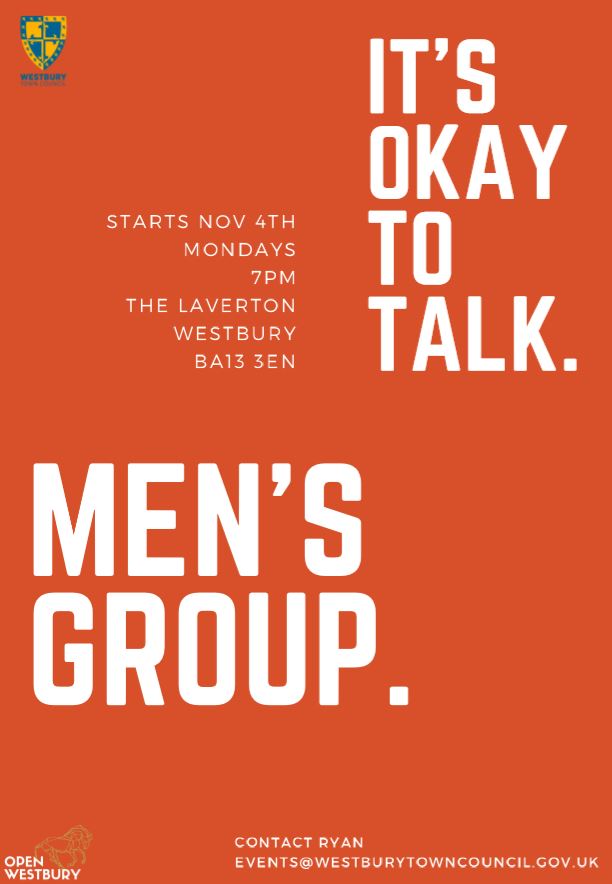 Westbury Town Council launched its first Men’s Group in November 2019, highlighting the fact that mental wellbeing is a yearlong focus.

The group will run every Monday at 7pm, usually at The Laverton

Wiltshire’s higher than national average suicide rate is one motivation for the group, not least because 75% of all suicides are male. It’s also true that 1 in 8 men have a common mental health problem but are far less likely to seek help than their female counterparts.

This meetup is all about having an informal space to talk or listen. Whether that’s about feeling a bit down or how terrible Man United are these days. There is no pressure and you don’t even have to say a word if you don’t want to. There’s tea, coffee and some snacks, along with a group of blokes who won’t judge and will just lend an ear. The group is aimed at anyone who just fancies a chat.

This website uses cookies to improve your experience while you navigate through the website. Out of these, the cookies that are categorized as necessary are stored on your browser as they are essential for the working of basic functionalities of the website. We also use third-party cookies that help us analyze and understand how you use this website. These cookies will be stored in your browser only with your consent. You also have the option to opt-out of these cookies. But opting out of some of these cookies may affect your browsing experience.
Necessary Always Enabled
Necessary cookies are absolutely essential for the website to function properly. This category only includes cookies that ensures basic functionalities and security features of the website. These cookies do not store any personal information.
Functional
Functional cookies help to perform certain functionalities like sharing the content of the website on social media platforms, collect feedbacks, and other third-party features.
Performance
Performance cookies are used to understand and analyze the key performance indexes of the website which helps in delivering a better user experience for the visitors.
Analytics
Analytical cookies are used to understand how visitors interact with the website. These cookies help provide information on metrics the number of visitors, bounce rate, traffic source, etc.
Advertisement
Advertisement cookies are used to provide visitors with relevant ads and marketing campaigns. These cookies track visitors across websites and collect information to provide customized ads.
Others
Other uncategorized cookies are those that are being analyzed and have not been classified into a category as yet.
SAVE & ACCEPT
Go to Top